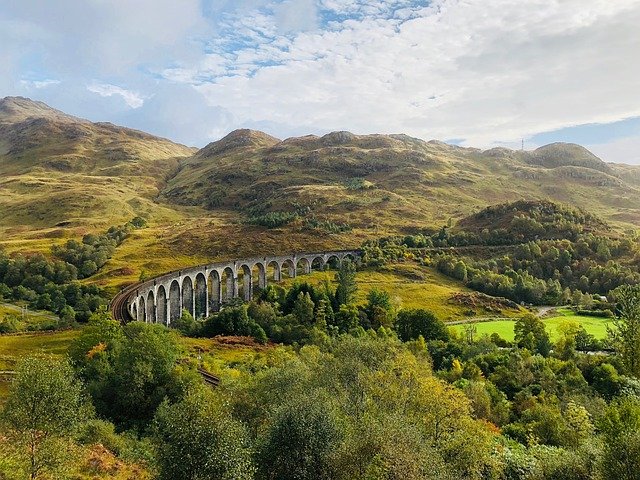 Harry Potter is a big part of many children (and adults) lives. There comes a time at school where their friends all seem to be reading the books and watching the films. Or maybe you loved Harry Potter and want your child to experience the same joy the books gave you as a child.

Then take the magic a step further by seeing some of the places the films were shot in real life. Filming took place in numerous places around the UK, so hopefully you’ll find a location that not too far from home. Here are a few: One of the most iconic images from Harry Potter is the him pushing his luggage trolley through the pillar of platform  9 and 3/4. This was filmed at Kings Cross Station. It’s worth a visit just to get a photo of the kids pushing the staged trolley through the wall and even better – it’s totally free.

Alnwick Castle is one of the places the Hogwarts scenes were shot. They have lots of Harry Potter themed events advertised on their website. Hardwick Hall, also known as Malfoy Manor. If you’re a Slytherin, then this is a must see.

A visit to Goathland Train Station is like taking a step back in time. This was the setting for Hogsmeade Station.

The Glenfinnan Viaduct was the setting for the bridge to Hogwarts. The stunning views of the area are breathtaking. You can ride the train but tickets book up a long time in advance, so book early. Although no scenes were filmed here, this is simply a must see for all Harry Potter fans!!

Here are some other locations:

So, the next time you’re  stuck for an idea for a day out, why not try to chase down Harry Potter’s stomping grounds…?

Welcome to Family Fun Getaways, where you can find tips and tricks on travelling with kids.

Copyright. All Rights Reserved. | Designed by Crafthemes.com
We use cookies on our website to give you the most relevant experience by remembering your preferences and repeat visits. By clicking “Accept All”, you consent to the use of ALL the cookies. However, you may visit "Cookie Settings" to provide a controlled consent.
Cookie SettingsAccept All
Manage consent

This website uses cookies to improve your experience while you navigate through the website. Out of these, the cookies that are categorized as necessary are stored on your browser as they are essential for the working of basic functionalities of the website. We also use third-party cookies that help us analyze and understand how you use this website. These cookies will be stored in your browser only with your consent. You also have the option to opt-out of these cookies. But opting out of some of these cookies may affect your browsing experience.
Necessary Always Enabled
Necessary cookies are absolutely essential for the website to function properly. These cookies ensure basic functionalities and security features of the website, anonymously.
Functional
Functional cookies help to perform certain functionalities like sharing the content of the website on social media platforms, collect feedbacks, and other third-party features.
Performance
Performance cookies are used to understand and analyze the key performance indexes of the website which helps in delivering a better user experience for the visitors.
Analytics
Analytical cookies are used to understand how visitors interact with the website. These cookies help provide information on metrics the number of visitors, bounce rate, traffic source, etc.
Advertisement
Advertisement cookies are used to provide visitors with relevant ads and marketing campaigns. These cookies track visitors across websites and collect information to provide customized ads.
Others
Other uncategorized cookies are those that are being analyzed and have not been classified into a category as yet.
SAVE & ACCEPT